On August 30th, 2018, Zumiez celebrated its 40th anniversary. By this point, the store had grown to over 700 locations. Shah Safari celebrated this anniversary as Shah Safari was one of the first brands sold by Zumiez. In fact, the first sale Zumiez sold was a large Shah Safari shirt for $12.99 in 1978.

On the day of the anniversary, the Founder of Zumiez wrote:

“It was 40 years ago today that Zumiez opened its first store at Northgate Mall in North Seattle. I never could have imagined this journey. I have to say above all else, I’m so proud of all of you and what we’ve accomplished over the decades and now around the world. Under Rick’s incredible leadership and staying strong with Zumiez culture…we are rolling it up. At age 40, Zumiez is just getting started. I’m truly honored to be a part of this…”

To this day, Zumiez continues to thrive and grow in the US and Canada. As a brand focusing on cutting-edge, trendy fashion for snowboarding, skating, and active lifestyles, Zumiez has made an impact on both Washington and American clothing. 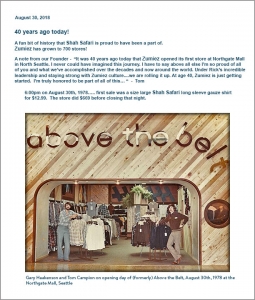 About the Author: Taylor Younker